Note: this page mirrored from:  https://chasingufosblog.com/2020/07/03/truman-bethurum-and-his-curvaceous-captain-from-clarion/

Truman Bethurum's exposé about his multiple experiences aboard a flying saucer in the Nevada desert and his conversations with the sexy captain named, Aura Rhanes. She said they were Christians from a place called Clarion (another name for Heaven in ancient writings).

According to Bethurum Captain Rahnes and her crew come from a perfect planet called Clarion blocked from our vision as it is beyond the far side of the sun, and 'beyond your moon" (this was before USA astronauts had reached the moon). Clarionites are Christian but parts of the population had turned towards paganism (Bible reference to the 1/3 of the fallen rebel angels who fell from Paradise and fell to Earth/the Outer Darkness, this realm).

They like family  and  group get-togethers and dances, the children are all very well behaved and organizational. There is no need for medicine, government, or laborers.

Berthurum's  first wife was so  jealous  of Truman talking about the perfect and most beautiful captain Aura Rhanes and her UFO crew that she named  Captain Rahnes in the divorce proceedings. The Captain offers to take Bethurum to Clarion. She never answers their prearranged signals in the desert. Berthurum leaves Nevada and returns to his native California. He went on to write three more books and establish 'The Sanctuary of Thought' in Arizona.

(The below several paragraphs mirrored  from Nick Redfern....UFOologist)

"Whitley Strieber’s 1987 best-selling book, Communion, brought the world of alien abductions to a massive, mainstream audience. During the course of investigating his experiences that prompted him to write Communion, Strieber discovered something intriguing: that the name “Aura Rhanes” – an alleged human-like alien encountered by a man named Truman Bethurum in 1952 – was extremely similar to “Aerach Reann,” a Gaelic term that translates approximately to “heavenly body of air.” It must be said that the fashion by which Bethurum became entranced by Aura Rhanes (“tops in shapeliness and beauty” was how smitten Bethurum described her) mirrors those centuries-old cases of hapless and helpless men falling under the spell of the fairy queen. Strieber pursued this Gaelic issue.

"In the same time-frame that Truman Bethurum was under the hypnotic spell of Aura Rhanes, a controversial man named George Adamski claimed encounters with human-like extraterrestrials in the deserts of California. There’s no doubt that Adamski was, and still is, the ultimate Contactee – regardless of what one might make of his claimed experiences with the long-haired, human-looking “Space Brothers,” as he termed them. What is particularly interesting is that one of Adamski’s alleged brothers from the stars was named Firkon. Strieber says of this: “Fir or fear when used as a prefix means ‘man,’ and Conn, meaning ‘Head,’ is the name of a seventh-century Irish king whose son, tradition tells us, was abducted by a beautiful lady in a flying craft. Firkon means, in Gaelic, ‘man of Conn.’”

"Then there are the experiences of a young man named Bob Renaud. On one particular night in July 1961, Renaud picked up an extraordinary message while “browsing around the shortwave bands” in his small, Massachusetts town. It began with a series of bleeps but was soon replaced by a female voice, which later identified herself as Linn-Erri from the planet Korendor. As was the case in so many Contactee-themed cases of the 1950s and 1960s, Renaud had repeated and extensive chats with his newfound alien friends, many of which were focused on the aliens’ fears that we, the Human Race, were on the verge of destroying ourselves. Also closely following the trend of so many Contactees, Linn-Erri and her comrades took Renaud on trips to secret, alien installations, and taught him to create complex machines, one of which was somewhat akin to an old-style television set. It reportedly allowed Renaud to see Linn-Erri in the flesh, so to speak. She was, said Renaud, a ravishing blond, who looked to be about nineteen years of age, but who claimed to be closer to her mid-seventies – in human years.

"It’s not unreasonable to suggest that this could all have been provoked by nothing stranger than the late night, hormone-driven fantasies of a young man run wild. But, as with the equally controversial saga of Truman Bethurum, there is something that makes Bob Renaud’s story intriguing, as Strieber states in his work. Strieber notes that the aliens’ alleged home planet, Korendor, is very similar to a Gaelic term that Strieber described as “a place of oracle.”

"Betty Andreasson is someone who has had a lifetime of profound interaction with other-world entities and whose encounters caught the attention of Strieber. On one occasion in the 1960s, when Andreasson was deep in channeling-style conversation with a small, large-headed alien being named Quaazga, a curious statement was made to Andreasson in a language that she could not understand. One person did understand it, however: a man named Leonard Keane. Listening to audio-recordings of Andreasson relating the statement word for word, he concluded the alien was speaking in a form of ancient Gaelic, which translated to the following: “The living descendants of the Northern Peoples are groping in universal darkness. Their mother mourns. A dark occasion forebodes when weakness in high places will revive a high cost of living, an interval of mistakes in high places, an interval fit for distressing events.”

Coincidence or something more? A UFO-Gaelic Connection?"

(  the above  Nick Redfern paragraphs mirrored from:   https://mysteriousuniverse.org/2019/01/aliens-whats-in-a-name/ ) 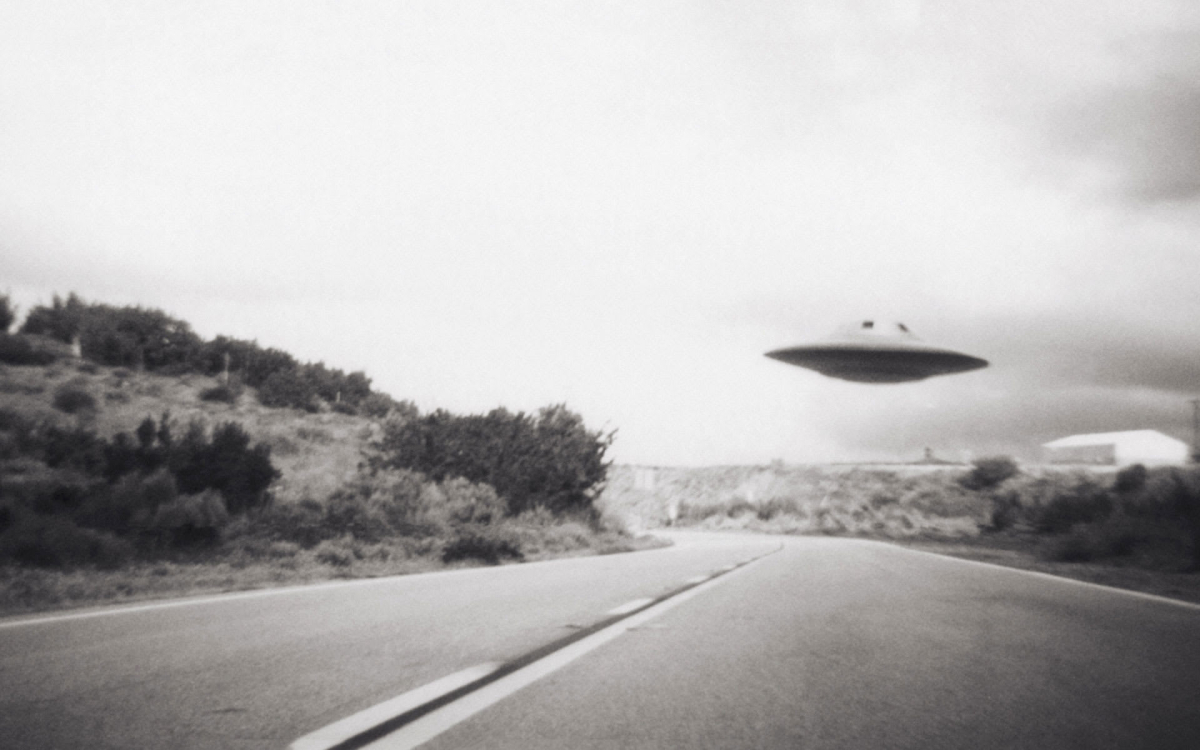 (Click on picture to read back cover full size)

One evening in July of 1952, Truman Bethurum—a heavy equipment mechanic working on a project near the California/Nevada border—pulled off the side of the road to catch some quick shut-eye when he was startled from sleep by several small olive-skinned beings gathered around the cab of his pick-up truck. “Our homes are our castles in a faraway land,” Bethurum’s new found friends informed him. Meanwhile a silver saucer 300 feet in diameter spun overhead.

“Have you a captain?” Bethurum inquired, rubbing the sleep from his bedazzled eyes.

“Surest thing you know,” one of the olive-skinned ETs replied and invited Bethurum aboard their ship (which they called a “scow”). 1 In short order, Bethurum found himself in the presence of the ship’s captain, a gorgeous gal named Aura Rhanes. As Bethurum waxed in Aboard A Flying Saucer (1954): “Little did I suspect that their captain would turn out to be a woman—and what a woman!” Bethurum described Aura as “tops in shapeliness and beauty” with a complexion that was “a beautiful olive and roses” causing him to stare dumbfounded, unable to form a sentence. “Speak up, friend,” Captain Rhanes implored Bethurum. “You’re not hexed!”

Aura and her crew spoke perfect English—in rhyming couplets, no less—and hailed from Clarion, a planet permanently hidden behind Earth’s moon. According to the Claronites, their home was straight out of some Utopian paradise where such things as divorce, smoking tobacco, drinking liquor, and other such evil earthly pursuits didn’t exist. (Borrrrinnngg!) On account of all this wholesome living, Clarionites lived to be around a thousand years old and could levitate at will. They were also tops in scientific technology and had developed a machine called the Retroscope that allowed them to see any place in the universe at any time in history.

The Clarionite “scow” was constructed of “the finest Martian steel.” The crew members dressed like Greyhound bus drivers, except for our adorable Captain Rhanes, who sported a radiant red skirt, black velvet short sleeve blouse and black beret with red trim like some kind of space age beatnik beauty. For general amusement, the Claronites passed the time—during the course of their intergalatic travels—playing polkas and square dancing. On a more serious note, Captain Rhanes informed Bethurum that if mankind didn’t quit squabbling amongst themselves, they would never be able to achieve space flight. She also had a flair for the dramatic: “I expect to be around for 1,000 years, but the water in your deserts will mostly be tears.” Sad!

Following his initial contact with Captain Aura and her crew of Greyhound bus drivers, Bethurum returned to his hotel room and wrote this historic note: “If I am found dead in my bed, it will be because my heart has stopped from the terrible excitement induced by seeing and going aboard a flying saucer!”

Over a three month period, Aura visited Truman on eleven occasions, sometimes materializing in his bedroom, much to the chagrin of Bethurum’s wife, Mary, who later cited the comely space captain in her divorce petition.

Bethurum enjoyed another shot at marital bliss in 1960, although unfortunately it wasn’t with shapely Aura, but a weathered old gal named Alvira Roberts, their nuptials taking place on the podium at the Giant Rock Spacecraft Convention. During one of Aura’s later materializations, she instructed Bethurum to gather around himself some friends—particularly those with greenbacks—and establish the “Sanctuary of Thought”, a cosmically inspired commune dedicated to “peace and brotherly love” based out of Prescott, Arizona, that could help Truman generate some extra income.  It was through the “Sanctuary of Thought” that he sold signed copies of Aboard a Flying Saucer, as well as delivering services as a “spiritual advisor.”

The last time Bethurum beheld his curvaceous space captain was in the early morning hours of August 27th, 1952 at an all-night roadside diner in Glendale, Nevada:

Bethurum was enjoying a late night snack of pie and coffee with Whitey Edwards…when he felt an elbow in his side. Edwards gestured eagerly toward the lunch counter, where a small man was seated next to a tiny woman wearing a black and red beret, a black, velvety blouse, and a brilliant red pleated skirt… It had to be Aura Rhanes and one of her crewmen!

Bethurum looked, and confirmed Edwards’ suspicion. Would he like to be introduced?

Edwards, strangely put off by the presence of the celestial visitors, refused and began gathering his things to leave.

“If you do,” Bethurum cautioned, “stand near the door so you can see what they get into and which way they go when they come out.”

Then he approached his extraterrestrial friends. “I beg your pardon, Lady, but haven’t we met before?”

No, she insisted to each of his repeated requests for recognition, no, no. He turned to pay his check, and the pair were gone. He rushed outside and demanded Whitey Edwards’ report – where had they gone?

“Honest, Truman,” his friend responded, “Not a blessed soul passed through that door until you came out.”

Truman Bethurum was one of the well known 1950s UFO or alien "contactees"- individuals who claimed to have spoken with people from other inhabited planets and entered or ridden in their spacecraft. Bethurum was born in Gavilin, California, and in the early 1950s worked as a truck driver and a mechanic on a desert road-building crew. He later became a self-proclaimed spiritual advisor. In 1953, Bethurum first published magazine and newspaper accounts of being contacted on eleven separate occasions by the humanoid crew of a landed space ship in the Nevada desert, and repeatedly conversing with its beautiful and voluptuous female captain, Aura Rhanes. Saucer and crew, who spoke colloquial English, came from the unknown planet Clarion, allegedly on the other side of our Sun, and thus cannot be seen from the Earth. Bethurum's 1954 book, Aboard a Flying Saucer, gave many details of his suffering at the hands of skeptics and a great deal of information about Captain Rhanes, Clarion and its people