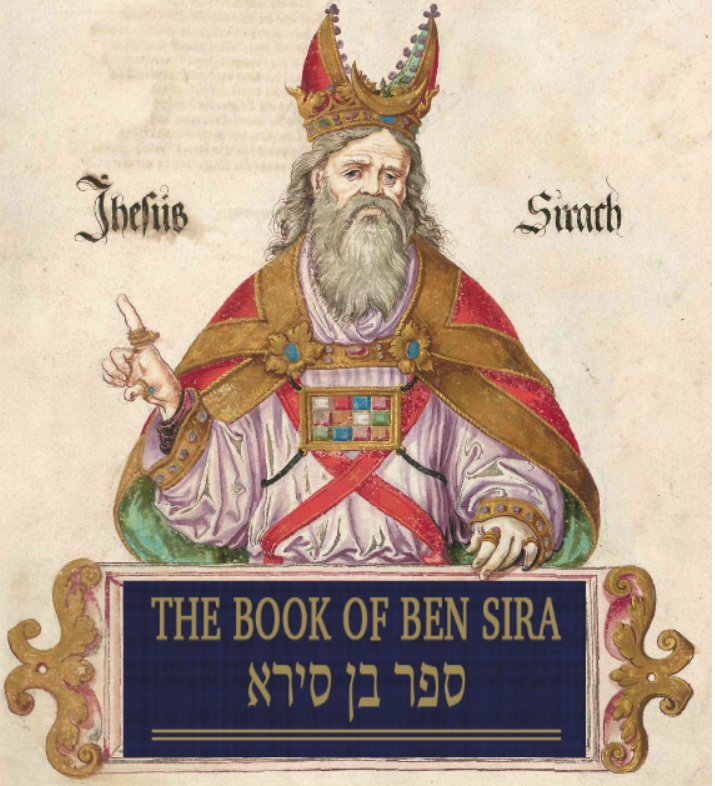 when your other self becomes your enemy?

3   “Alas, my companion! Why were you created

to fill the earth with deceit?”

4  A harmful friend will look to your table,

but in time of trouble he stands aloof.

5  A good friend will fight with you against the foe,

and against your enemies he will hold up your shield.

6  Do not forget your comrade during the battle,

and do not neglect him when you distribute your spoils.

7  Every counselor points out a way,

but some counsel ways of their own.

8  Watch out when one offers advice;

find out first of all what he wants.

For he also may be thinking of himself—

Why should the opportunity fall to him?

9  He may tell you how good your way will be,

and then stand  by to see you impoverished.

10  Seek no advice from your father-in-law,

and from one who is envious of you, keep your intentions hidden.

11  Seek no advice from a woman about her rival,

from a coward about war,

from a merchant about business,

from a buyer about value,

from a miser about generosity,

from a cruel person about well-being,

from a worthless worker about his work,

from a seasonal laborer about the harvest,

from an idle slave about a great task—

pay no attention to any advice they give.

12  Instead, associate with a religious person,

who you know keeps the commandments;

Who is like-minded with yourself

and will grieve for you if you fall.

for there is nothing you can depend on more.

14  The heart can reveal your situation

better than seven sentinels on a tower.

to make your steps firm in the true path.

a thought, of every act.b

17  The root of all conduct is the heart;
18  four branches it shoots forth:

Good and evil, death and life,

and their absolute mistress is the tongue.c

19  One may be wise and benefit many,

yet appear foolish to himself.

20  One may be wise, but if his words are rejected,

he will be deprived of all enjoyment.*

22  When one is wise to his own advantage,

the fruits of knowledge are seen in his own person.

23  When one is wise to the advantage of people,

the fruits of knowledge are lasting.d

24  One wise for himself has full enjoyment,

and all who see him praise him.

25  The days of one’s life are numbered,

but the life of Israel, days without number.

26  One wise among the people wins a heritage of glory,

and his name lives on and on.e

27 My son, while you are well, govern your appetite,*

and see that you do not allow it what is bad for you.

28 For not everything is good for everyone,

nor is everything suited to every taste.f

29 Do not go to excess with any enjoyment,g

neither become a glutton for choice foods;

30 For sickness comes with overeating,

and gluttony brings on nausea.

31 Through lack of self-control many have died,

but the abstemious one prolongs life.

THE WISDOM OF BEN SIRA

The Wisdom of Ben Sira derives its title from the author, “Yeshua [Jesus], son of Eleazar, son of Sira” (50:27). This seems to be the earliest title of the book. The designation “Liber Ecclesiasticus,” meaning “Church Book,” appended to some Greek and Latin manuscripts, is perhaps due to the extensive use the church made of this book in presenting moral teaching to catechumens and to the faithful. The title “Sirach” comes from the Greek form of the author’s name.

The author, a sage who lived in Jerusalem, was thoroughly imbued with love for the wisdom tradition, and also for the law, priesthood, Temple, and divine worship. As a wise and experienced observer of life he addressed himself to his contemporaries with the motive of helping them to maintain religious faith and integrity through study of the books sacred to the Jewish tradition.

The book contains numerous well-crafted maxims, grouped by affinity, and dealing with a variety of subjects such as the individual, the family, and the community in their relations with one another and with God. It treats of friendship, education, poverty and wealth, laws, religious worship, and many other matters that reflect the religious and social customs of the time.

Written in Hebrew in the early years of the second century B.C., the book was finished by ca. 175. The text was translated into Greek by the author’s grandson after 117 B.C. He also wrote a foreword which contains valuable information about the book, its author, and himself as translator. Until the close of the nineteenth century the Wisdom of Ben Sira was known to Christians in translations, of which the Greek rendering was the most important. From it the Latin version was made. Between 1896 and 1900, again in 1931, and several times since 1956, incomplete manuscripts were discovered, so that more than two thirds of the book in Hebrew is available; these Hebrew texts agree substantially with the Greek. One such text, from Masada, is pre-Christian in date. The New American Bible provides a critical translation based on the evidence of all the ancient texts.

Though not included in the Jewish Bible after the first century A.D., nor, therefore, accepted by Protestants, the Wisdom of Ben Sira has been recognized by the Catholic Church as inspired and canonical. The Foreword, though not properly part of the book, is always included with it because of its antiquity and importance.

The contents of the Wisdom of Ben Sira are of a discursive nature, not easily divided into separate parts. Chapters 1–43 deal largely with moral instruction; 44:1–50:24 contain a eulogy of the heroes of Israel. There are two appendixes in which the author expresses his gratitude to God (51:1–12), and invites the unschooled to acquire true wisdom (51:13–30).